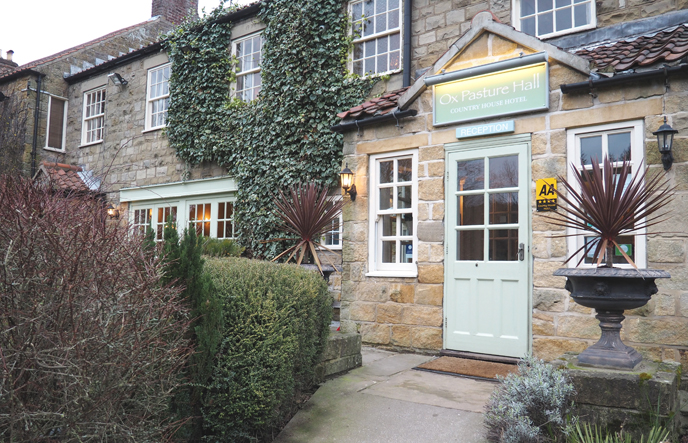 Last weekend was one which I had been looking forward to for a while now, in January I was contacted by the lovely people at Ox Pasture Hall and invited to spend a night at the country hotel in Yorkshire. At a time when the post Christmas blues had truly set in, I was in need of something to look forward to so this little getaway was absolutely perfect!

So last weekend Adam and I packed up the car and set off on our way up north! The hotel is located just fifteen minutes away from Scarborough which is a seaside town I’m very familiar with as I spent the majority of my childhood holidays in nearby Filey. We decided to make a nostalgic stop off on our way to the hotel as we still had a couple of hours to kill before we were able to check in. On a wet and very windy Saturday in February it wasn’t quite as I had remembered it from all of those years ago but we took the opportunity to indulge in all of the classic seaside attractions! We used up all of our loose change in the arcades, grabbed a cone of chips with copious amounts of salt and vinegar and got chased by seagulls!

Once we could no longer feel our toes we decided to jump back into the car and head over to the hotel. Driving for just fifteen minutes and we were suddenly no longer at the coast but in the middle of the peaceful countryside. I imagine it would be the absolute ideal location if you’re an avid walker as you could spend your days exploring the local area before returning to the hotel for a touch of luxury! As we drew up to the hotel, the building and grounds were so picturesque we immediately became ridiculously giddy at the prospect of spending the night here. We grabbed our bags and made our way to the reception area to check in. Right from the very start you could see how attentive and caring the staff were, doing everything possible to make our stay as comfortable as possible. 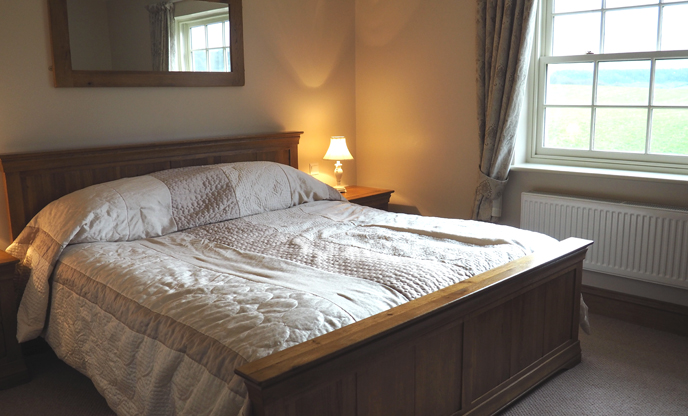 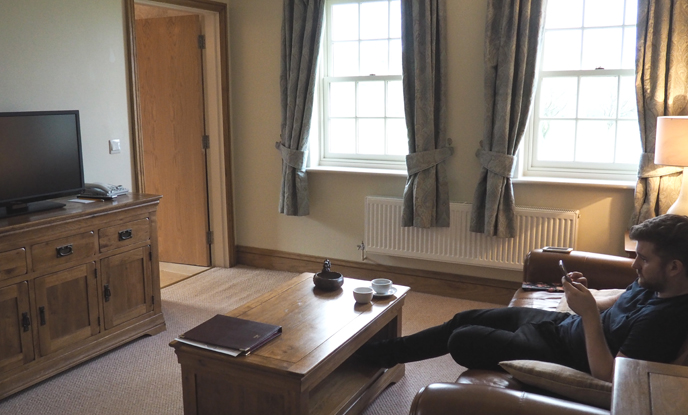 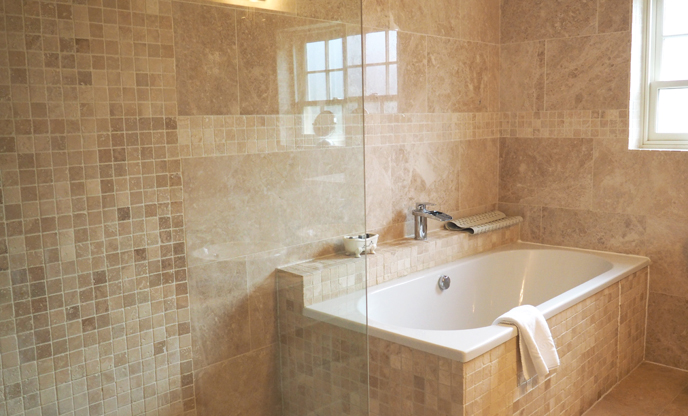 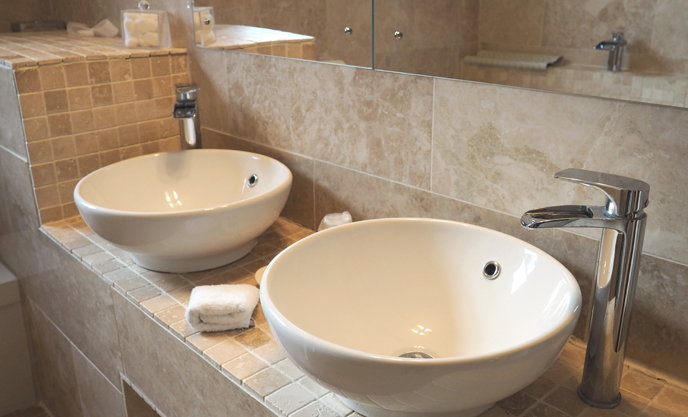 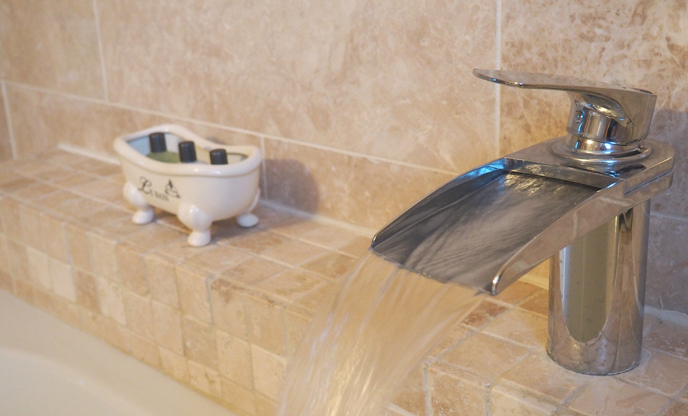 We were shown to our room which was one of the luxury suites and we both were stunned by how gorgeous it was! Super spacious with a lounge area, bedroom with comfy king size bed and incredible bathroom we felt at home straight away! We had booked in for dinner at half past seven so had a little time to relax beforehand which was nice, we went for a little wander around the grounds before retiring to our room and I of course had to jump straight into that amazing bath! We slowly got ourselves ready whilst being wrapped up in the complimentary white fluffy robes (I’m surprised I managed to take it off for dinner) and enjoyed a good old cup of tea before heading down to the restaurant. 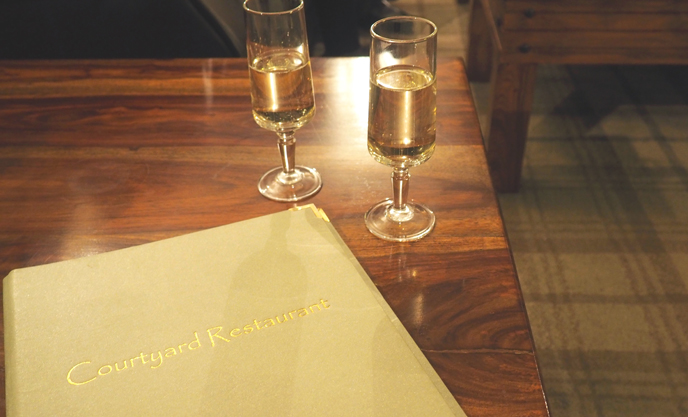 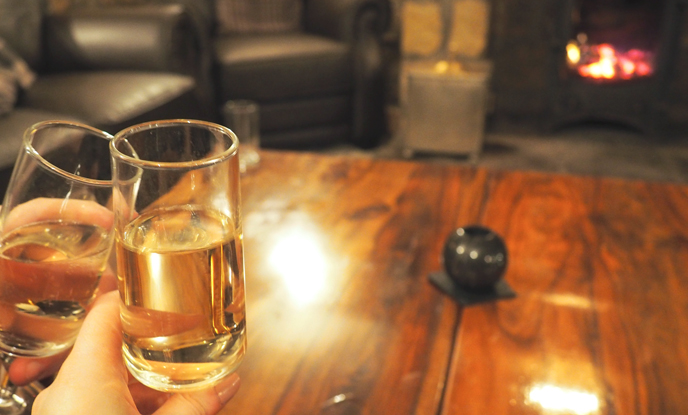 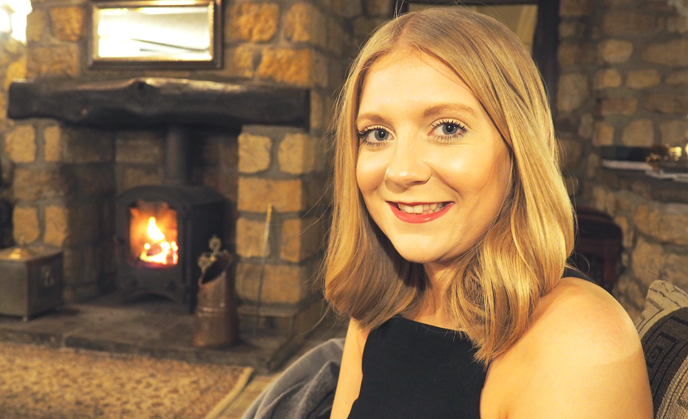 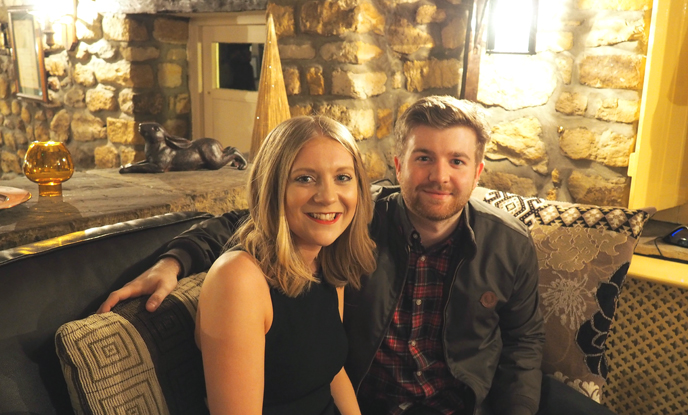 We were shown to the bar area which was really cute with a roaring fire which added to the cosy atmosphere. We were brought over a bottle of Prosecco which was a lovely touch and a real treat, I could have stayed there all evening long! We browsed over the menu as we sipped on our champagne and deliberated over what we wanted to eat. 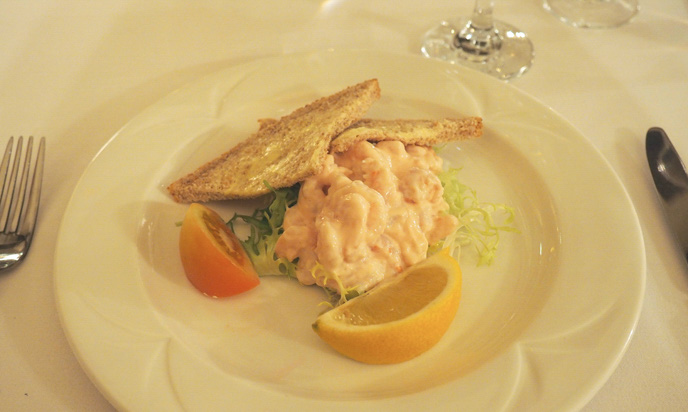 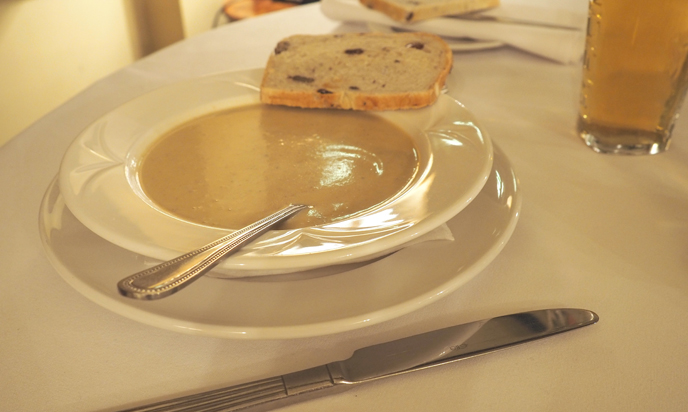 For starter I chose the prawn cocktail and Adam went for the cauliflower and blue cheese soup with homemade bread which he said was delicious (and is still talking about a week later). Before our starters arrived we were also presented with a little taster of a different starter to try, I was given the soup and Adam the ham hock. This was a really nice touch and just another detail that really made you feel like you were experiencing a luxury stay. 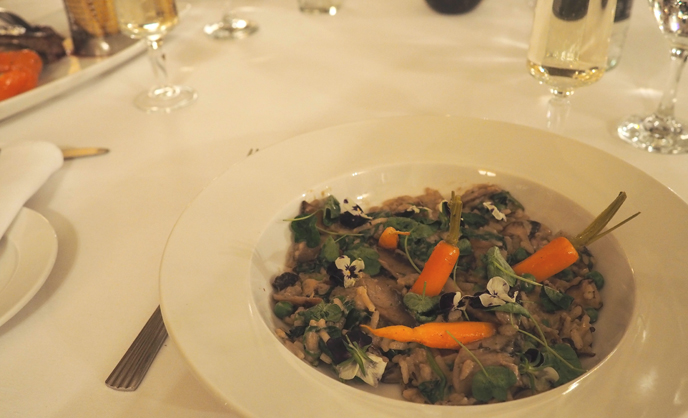 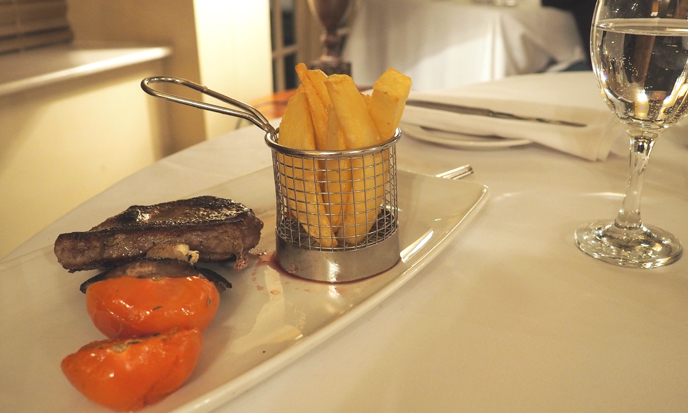 For the main course I felt a tad limited with what I could choose as I’m not the biggest meat eater so I plumped for the mushroom risotto which was beautifully presented with edible flowers and roasted carrots. Adam had been hoping that there was going to be steak on the menu so his mind was made up as soon as he spotted it! 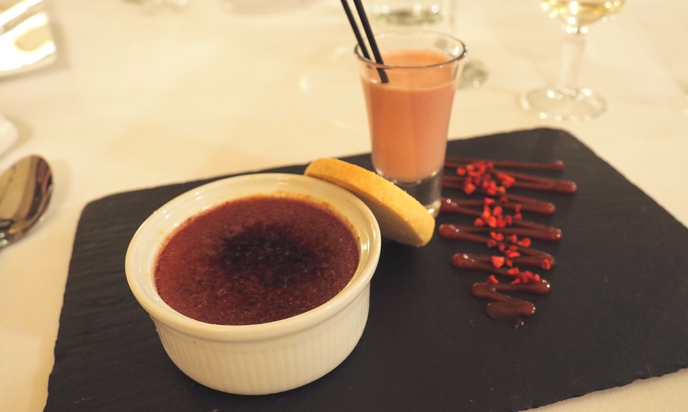 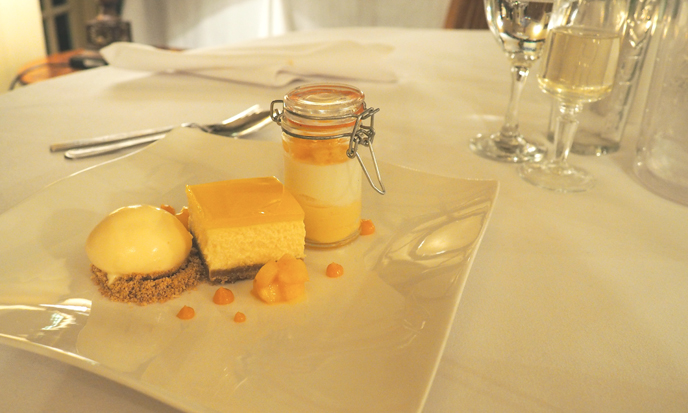 Dessert came around and I really wanted to pick the chocolate fudge cake but as I’ve given up chocolate for lent I had to find an alternative. In the end I went for the raspberry creme brulee and I’m so glad I did as it was absolutely gorgeous. It came with a shortbread biscuit and mini raspberry milkshake which was so cute! Adam chose the lemon cheesecake which was accompanied by lemon tart ice cream and yoghurt. The presentation of all of the courses was amazing and we left with extremely full bellies! 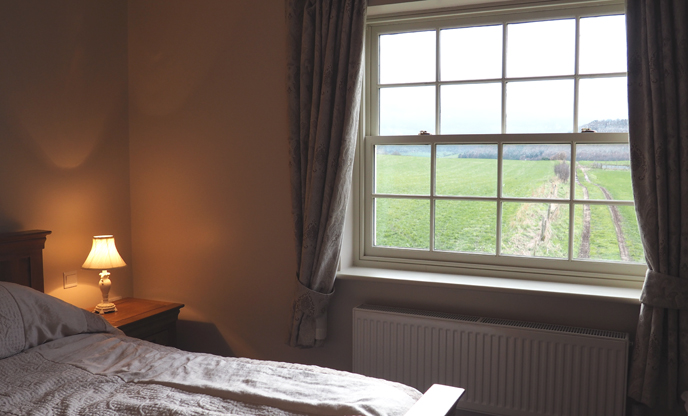 We woke the next morning still feeling rather full from the night before but jumped out of bed, excited to try out the amazing waterfall shower before heading down for breakfast. 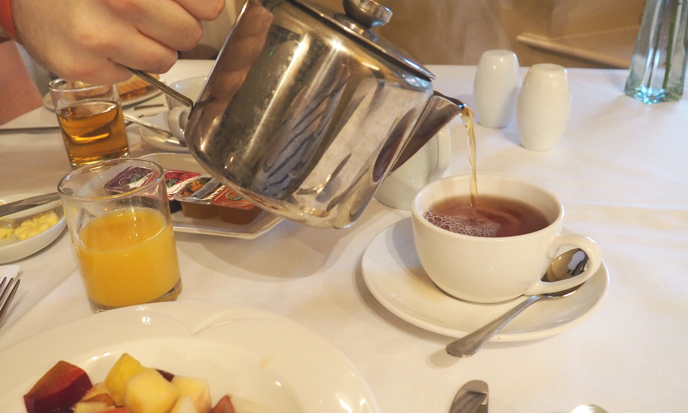 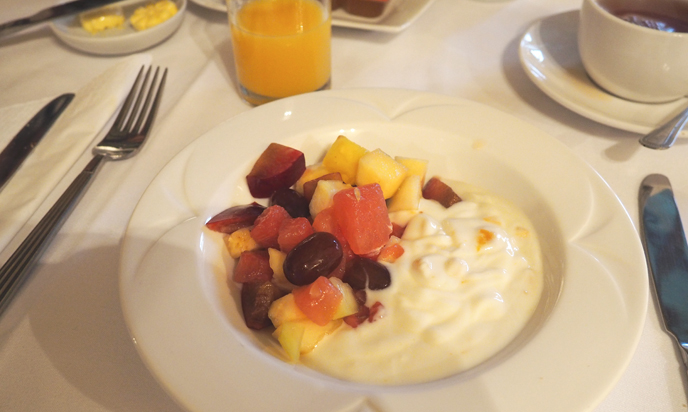 A continental breakfast is one of my absolute favourite parts about staying in a hotel so straight away I got stuck in, filling my plate with fruit, yoghurt and cute mini pastries. We were asked if we would like a cooked breakfast so Adam got a poached egg on toast but I was quite happy with my little selection! 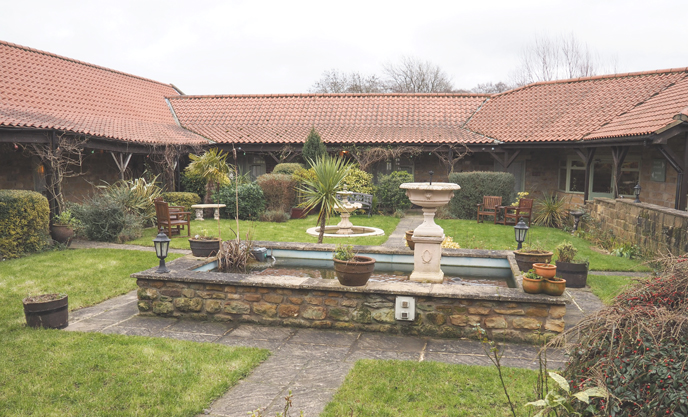 Sadly it was then time to pack up and check out, neither of us wanted to leave but we were amazed  at how re-energised we felt after just one night away from the hustle and bustle of everyday life. It’s definitely something we will have to do more of in the future. We packed up the car and said our goodbyes before hitting the road. We decided to make the most of the rest of the day and stop off at York on the way home as it was just under an hour away from the hotel and is a city I’ve always wanted to visit. 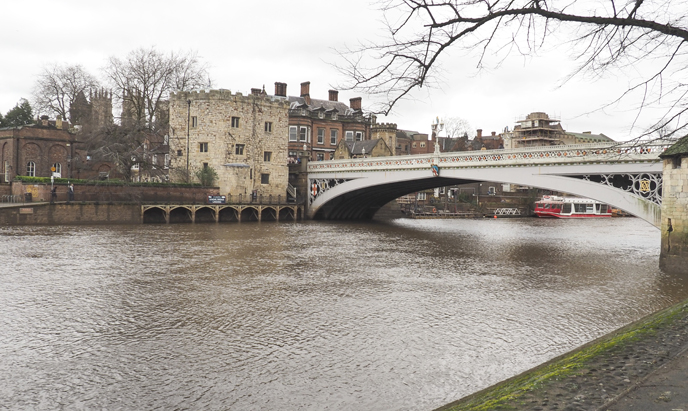 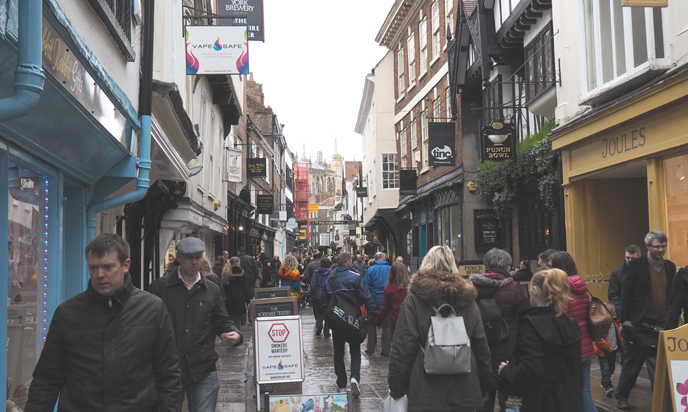 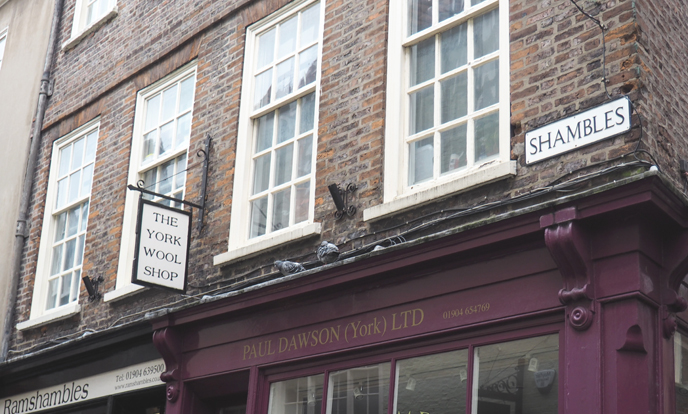 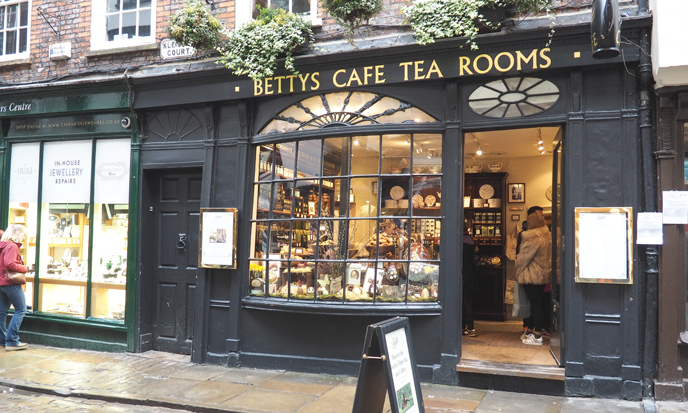 We pottered around the shops, explored The Shambles and contemplated a trip to the infamous Betty’s (before seeing the enormous queue!). It was a lovely way to round off an extremely fun filled weekend but feeling exhausted from all of the wandering we decided to call it a day and head back to the car before making our way back home.

We loved our stay at Ox Pasture Hall, a week later and I’m still wishing we could be back there! We’ll definitely be looking into heading back to stay for a weekend in the summer months as it would be lovely to explore more of the surrounding area.

Have you visited Yorkshire before? Do you have a favourite place?

We were very kindly gifted a complimentary one night stay at Ox Pasture Hall but all opinions are my own.

Adam and I are currently in the midst of planning this year's holiday, the only problem is, we can't quite...